UPDATES/University of Baltimore School of Law

Michele Gilman, the Venable Professor of Law in the University of Baltimore School of Law and director of its Saul Ewing Civil Advocacy Clinic and co-director of the Center on Applied Feminism, writes in Salon that the Supreme Court’s decision in the Epic Systems Corp. v. Lewis case may exacerbate a number of hot-button topics in the American workplace, including the problem of unpaid hours and the misclassification of employees. The growing #MeToo movement also takes a hit from this decision, she says.

In her analysis of the decision’s ramifications, Gilman points to the influence of Associate Justice Neil Gorsuch, author of the majority opinion.

Selena Qian (J.D. anticipated May 2018), who served as a student attorney at the University of Baltimore Low-Income Taxpayer Clinic during the spring and fall 2017 semesters, has been awarded the Maryland State Bar Association Tax Council Book Prize.  This $500 monetary book prize is given annually by the Council of the MSBA Tax Section to a J.D. or LL.M. candidate interested in practicing tax law in the state of Maryland.

During her time as a student attorney, Ms. Qian handled a range of federal tax controversies including collection matters, litigation in the U.S. Tax Court, and a factually complex refund claim.  After serving as a student attorney during the spring 2017 semester, her exemplary work led Tax Clinic Director John B. Snyder, III to invite her back for a second semester in the clinic.  During her time at the University of Baltimore School of Law, Ms. Qian also participated twice in the National Tax Moot Court Team, served as an officer in student organizations, and received a Dean’s Citation.  After graduation, she will serve as a law clerk for Judge Dennis Robinson, Jr. of the Circuit Court for Baltimore County.  After her clerkship, she plans to practice in the corporate tax field.

Professor Snyder and the University of Baltimore LITC extend their congratulations to Ms. Qian for this well-deserved honor. 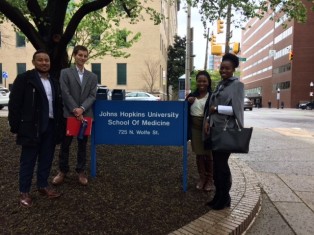