Venable Professor of Law Michele Gilman, the director of clinical legal education, sends exciting news: I am extremely pleased to let you know that the Human Trafficking Prevention Project (HTPP), led by clinical fellow and UB law alumna Jessica Emerson, J.D. ’13, has been awarded $465,757 from the Governor’s Office of Crime Control & Prevention […]

The front page of the Baltimore Sun today reports on a case being handled by the Pretrial Justice Clinic, in which the Clinic is challenging bail set by a judge who refused to make an individualized inquiry about the defendant, contrary to governing law.

“Makar and Shareef argue in court papers that not conducting an ‘individualized assessment’ amounts to a rigid ‘bail schedule’ which is not allowed under Maryland legal rules.

Reliance on a bail schedule results in faulty bail determinations that lead to the erroneous deprivation of liberty for individuals who have not been convicted of a crime,” they said. “While the nature of the offense is one of many factors that a judicial officer can consider,” they wrote, the court “ignored other important factors.”

You can read the whole story here, http://www.baltimoresun.com/news/maryland/baltimore-city/bs-md-ci-bail-appeal-20161026-story.html. 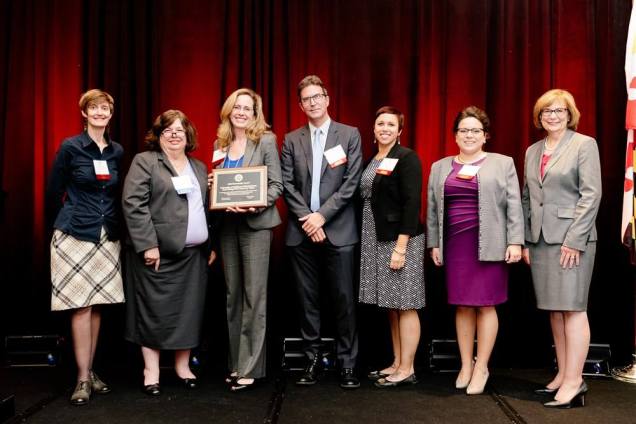 On Wednesday, October 12, the Saul Ewing Civil Advocacy Clinic was honored with the Pro Bono Partnership Award by the Maryland Volunteer Lawyers Service (MVLS).  CAC students have done an outstanding job over the years handling hundreds of cases referred to the Clinic by MVLS.  MVLS is wonderful resource and partner for the Clinic in helping us identify cases that not only help underserved people, but also serve our teaching mission of training excellent, ethical, and professional lawyers.  We are thrilled that CAC alum Susan Francis is the Deputy Director at MVLS.

Prof. Jaime Lee, director of the Community Development Clinic, was quoted in the Baltimore Sun today in an article discussing a proposed Baltimore City charter amendment for youth funding. The intention is to foster public participation by giving youth and other residents control over the use of the funds, but there is significant risk that this participatory governance opportunity may turn into mere tokenism. Read the entire article here:
http://www.baltimoresun.com/news/maryland/baltimore-city/bs-md-ci-charter-amendments-20160930-story.html